On May 17th, 2018, Game Freak designer James Turner (the creator of Pokémon like Vanillite, Golurk, and Poipole) tweeted pictures of a few excerpts from the then-recently published manga about Satoshi Tajiri’s life and the creation of Game Freak. Interestingly enough, despite claims from the developers that most of the documentation about the first two Pokémon games either never existed or was lost to time, one of the panels in this manga contains a look at an internal poll during development.
Our curiosity piqued, the Helix Chamber team – made up of translators, coders, people who know random trivia about the franchise, nerds, magnification wizards, you name it – gathered together, obtained a copy of the manga, scanned everything, and were able to unearth quite a lot of information. 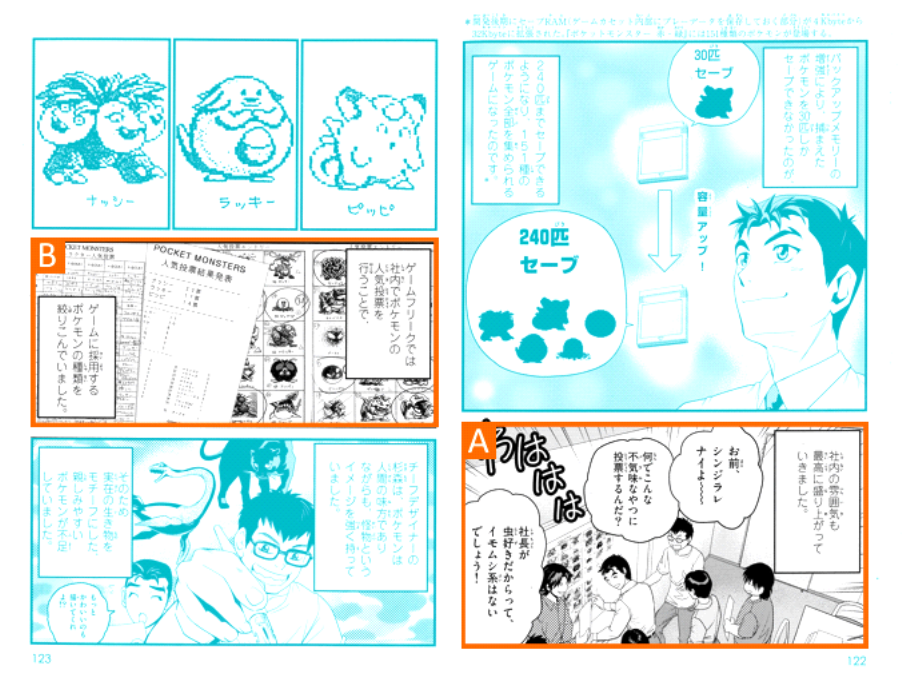 At first glance, this is a chart with a few things that aren’t found in the first Pokémon games (B), and a bunch of mysterious, warped monsters peering out from a skewed grid in the bottom panel (A).
Along with the Pokémon charts, there’s also a table with votes and a results sheet (B). All three of these documents were made for one of the several popularity polls (人気投票) that Game Freak held periodically in order to rate their Pokémon designs and help decide which monsters would be in the final game.

The first poll was reportedly held in October of 1992, when the crew surprisingly voted Exeggutor in as their favorite. However, the second place shown in the manga ( 1 – Exeggutor, 2 – Chansey, 3 – Clefairy) doesn’t match with the first poll records, which reported Slowbro in second place. These were mentioned in the book by Akihito Tomisawa about the history of Game Freak:
“ゲームフリーク ―遊びの世界標準を塗り替えるクリエイティブ集団”, published by Media Factory, page 106-7. This poll was also mentioned by Morimoto’s ingame character in Pokémon Sun and Moon. (The first poll account is pretty interesting, and we’ll report it below…).
This leads us to hypothesize that the Tajiri manga poll was not the first one held; instead, the poll was held either in the last months of 1992 or in 1993.

On the left side of panel B, we can see a page titled “Popularity Poll Results Announcement” (人気投票結果発表);  this piece of paper covering up the grid is the internal poll results, listing the winners and the number of votes that each one got. We’ve also been able to guess the top 31 by cross-referencing the material, albeit restoring the exact 11-20 order is not possible, unfortunately. 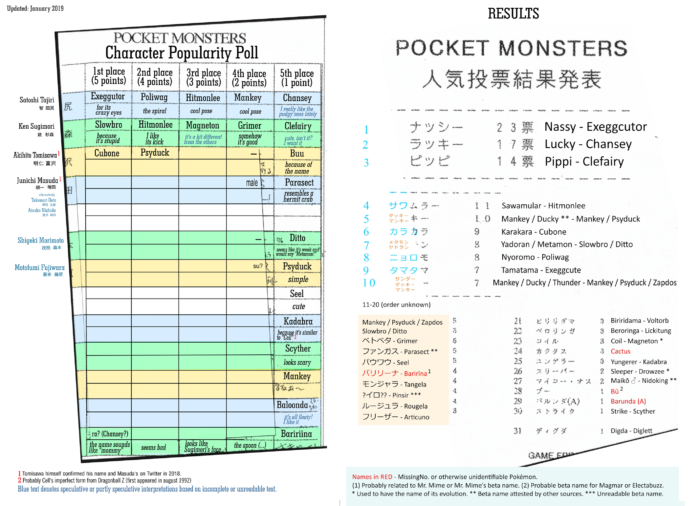 Even on the surface level, this manga is a revealing look inside the development of Game Freak’s hit franchise.

Pokémon Charts and the Missingno.

Here’s what we’ve got out of the four panels used for the internal poll, complete with a thorough restoration of panel A. Please note that in the actual manga, these images are super small and warped, We’re talking less than 5cm for every table.

Now, some people might recognize the numbers on the 2nd, 3rd, and 4th sheet matching the Internal ID order, which is the order in which Pokémon are organized within Red and Green’s programming. Unlike Generation II onwards, the Pokémon are not listed in Pokédex order. The first sheet follows the cry data order instead – more on that later.
Some Pokémon are marked with triangles and circles, which are commonly used in Japan for ranking, with best-to-worst being: ◎ ◯ △ × , where the double circle is perfect, and the triangle means that it needs improvement.
As a side note, in the final RG games, there are several sprites which don’t look like they were made directly by any individual credited artist. Instead, they look rather hastily scaled down. There is some evidence supporting that they did this within the poll; someone thought to re-proportion Pokémon who had received an evolution later in development. These sprites in the final games were already pretty blatantly rescaled, even before the evidence was solid enough. Some others were at least re-polished or re-drawn from scratch, like Venonat and Krabby. We also have evidence that a couple of bigger sprites were reworked into their respective evolutions (Doduo, Krabby).

Bios for everything here! Deleted or massively changed Pokémon are highlighted in blue. Once again, the Internal index order so you can follow along and the unused cries so you can listen along.

Block 1 doesn’t follow or even use index numbers. Instead, Pokémon are marked with a circled number that differs from the order in which they were programmed. These numbers instead match up with a different data list in the game, that being the cry data index. Each cry base (or melody) has a different hex value in the code. For example, Nidoran’s is 0x00 (decimal 0), Spearow’s is 0x10 (decimal 16), and Rhydon’s is 0x11 (decimal 17).
Note that the decimal values are exactly one less than the numbers with which these Pokémon were marked on the sheet. Blastoise, Pinsir and Tangela are way off, since they are marked with 35-37 instead of the expected 19-21.

The meaning of this is yet to be determined, but we suspect that it has to do either with their cries originally having a different hex value or some sort of Pokémon index number reordering later on. More insights about that in our new Game Informer documents analysis.

Open image in new tab to get the full resolution scan. Pokémon labelled with letters can’t reasonably be assigned an ID.

This block had to be heavily reconstructed, as it is about 2cm tall and tilted in the manga. Some sprites were deliberately brightened by the manga editors, leaving just a faded trail of dots. We were able to line up some of the final sprites with the dots, but not all of them had perfect matches. The editors also removed the various ranking marks, although we were able to restore some of the circled Pokémon, we won’t mark any as “Not ranked” since definitive evidence is missing. These Pokémon are mostly in order, with some slots flipped by one place.

Block 3 is the most bountiful of the four we have. Several early designs, names, and cut Pokémon are on this one, and it was the first to be posted online in May 2018. Of note here are several sprites that are marked with the triangle △ – none of those Pokémon are in the final game (since it meant “needs improvement”) except for Seel, whose design was overhauled significantly.

The final block has one very strange oddity at the end of it, that being a numberless Kangaskhan at the end of a row that’s filled with MissingNo. in the final game. It may be that Kangaskhan didn’t fit on another sheet and they moved it to an empty row here. Other than that, it follows the index order very closely like Block 3, but has one weird swap like in Block 2. The editors also removed the various ranking marks, we were able to restore some of the circled Pokémon but we won’t mark any as “Not ranked” since definitive evidence is missing.

There’s one name on the poll itself that we can sort of match up with what’s written there, the Pokémon named Barunda(A). The name itself is a pun on balloon and someone voted for it while commenting that they wondered if it was “fuwafuwa”

What’s notable is that Pokémon named in the voting documents are also circled in the sprite chart. As thus, we can assume that all circled Pokémon are present in the table and the results sheet, albeit some of their names are obscured. The circles were mostly edited out by the mangaka in the zoomed out picture, but we can still see traces of them around some of the designs. 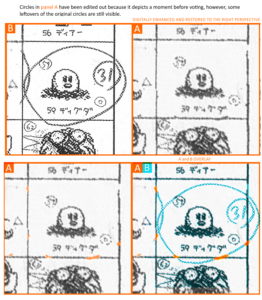 taking both versions of the sprite sheet into consideration, we can see that the following Pokémon were circled: Magneton, Mankey, Seel, Diglett, Cactus, Tangela, Pinsir, Scyther, Voltorb, Grimer, Lickitung, Psyduck, Jynx, Articuno, Zapdos, the mysterious orb in question, and probably others which are obscured.

We can safely assume that all of the aforementioned Pokémon were voted for, and their names are present in the voting table and the results sheet.
Pokémon whose names appear on the voting documents, but are heavily obscured or nowhere to be seen on the sprite chart, are as follows: Exeggutor, Chansey, Clefairy, Kadabra, “Sleeper” (Drowzee), “Maiko” (Nidoking), “Buu” (Magmar), Poliwag, Hitmonlee, Slowbro, Cubone, “Fungus” (Parasect), Ditto, Baririna (probably connected to Mr. Mime), Exeggcute (its name is mostly obscured but it’s the only one that has “ma” as a final kana). There’s one mysterious name, Barunda(A), in the results sheet. 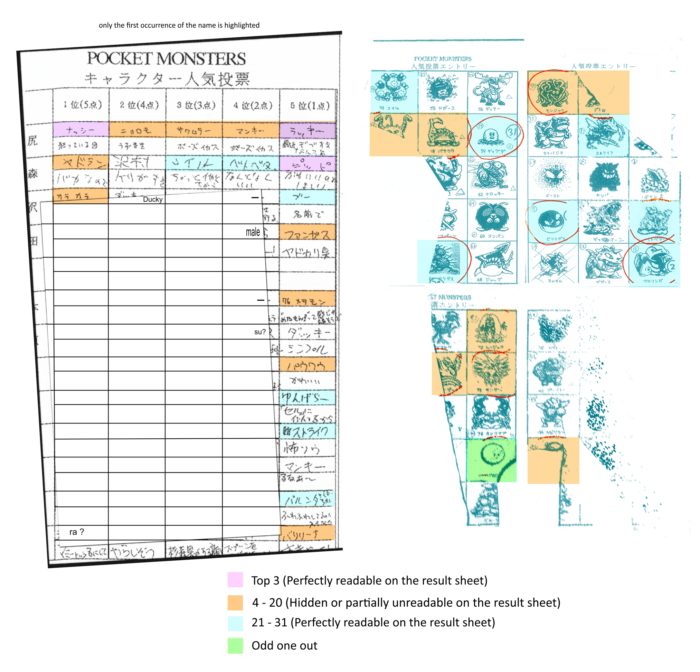 Adding both of the above sets together, not counting the mysterious name and the orb Pokémon, gets us the total number of 30 Pokémon. There were a total of 31 Pokémon voted for in the popularity contest, so we’re left with a name and a design that don’t fit anywhere else – therefore it’s safe to assume that the round Pokémon was in fact named Barunda.
To strengthen the argument that the orb and Barunda are the same monster, we point out the following:
⦁ Barunda seems to be a pun on balloons, and the orb Pokémon does look like one; 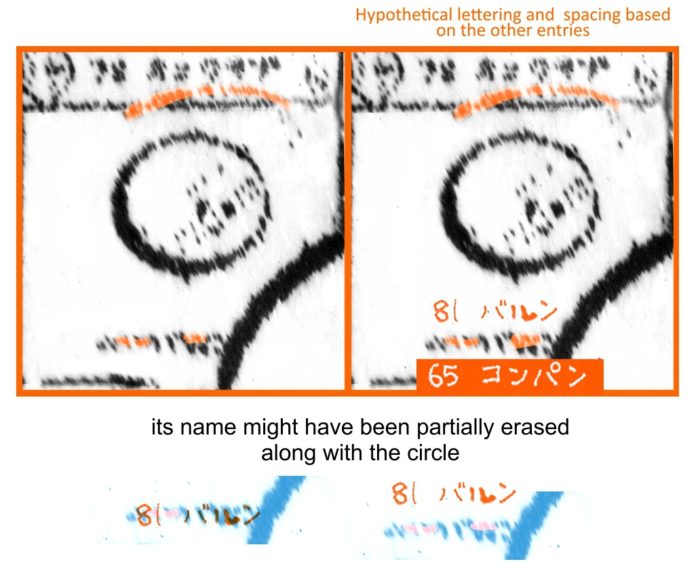 “Looking at the November 1992 Game Freak internal bulletin, we can see that the first popularity vote was held in October that year.  The top 3 favourite Pokémon were chosen from the about 80 monsters created at the time.
We’ll report the surprising result here. “Pocket monster” popularity vote result announcement!
As a result of voting by all participants, the most popular monsters are the following:
1st place, Exeggutor
2nd place, Slowbro
3rd place, Clefairy
following, Grimer, Exeggcute, Cubone, Nidoran (female), Ivysaur … … etc.
Judging by the results, it seems that popularity has concentrated on cute monsters such as Clefairy, Cubone etc —-. By this time, although Pikachu and Meowth were not yet there, it can be said that it is a very surprising result, I do not know why Exeggutor won first place. (…) After that, the same popularity vote was repeated several times.”