It’s been generally reported that Pokémon production was put on hold again in 1993 for a whole year, although we couldn’t find any first-hand source to back up this claim. The internal list suggests that a drastic shift in the games’ overall design occurred after this hiatus period. Mid 93 to early 94 would make sense for another hiatus, albeit shorter than reported, when taking a look at Game Freak’s bustling release schedule during that period (they were developing Mario & Wario, Nontan and Pulseman simultaneously!) According to the sources, we can deduce that production resumed in late 1993/early 1994. In fact, as recounted in the 2018 Yomiuri interview, Pikachu had been already designed before the Super Game Boy release in mid 94.

(Many unsourced reports are available online about the 1993 hiatus. For the moment we won’t quote any, as we’re unsure of their credibility. Hopefully, a more valid source will surface in the near future that will allow us to better clarify this interesting gap in Pokémon’s history.)

At the end of P2, proto-Kanto is a land inhabited mostly by bulky, wacky, and kind of menacing monsters. The game has more of a classic RPG fantasy-dystopic feel and is unintentionally targeted to little boys.

Sugimori: At first, the game was more RPG-like. It was only in the middle of development that the goal of the game became completing your Pokédex.

Tajiri and Sugimori, however, knew the game had to appeal to a broader audience and they felt that a female perspective was needed in order to make the fauna more diverse and generally less menacing.

Sugimori:  Since the game wasn’t just about getting monsters to fight, but also “collect and trade,” having only tough-looking monsters wasn’t enough. At the time we only had three designers, and I was the main one in charge of Pokémon designs. However, I am a male, and I was designing from the perspective of a man, (…) so the thought of “cute monsters” didn’t even cross my mind. So that’s when we got help from a female designer Nishida-san, (…). Not everyone looks for the same thing, meaning you have to have a lot of variation. (…) we made weird Pokémon, huge Pokémon, mechanical Pokémon… and after considering all these variations, I thought, ‘We need more cute ones.’

Atsuko Nishida, already a designer for Game Freak, finally joined the Pokémon team, bringing us into Period 3 (probably mid 1993-1994), a pivotal breakthrough in the games’ development.

At this point, some P1 and P2 Pokémon might have been already scrapped as a result of the periodical popularity polls supposedly held also in 1993, opening this new period with a bunch of empty slots from the prior periods ready to be filled with new Pokémon (we suspect that some P1b Pokémon, like Growlithe, might have been created during this period or even later).

While P1 and P2 felt more instinct-driven, production now gets decisively organized. Game Freak might have had the whole final games planned by the end of P3. Very few Pokémon until now had been granted an evolution or a pre-evolution, and the whole concept wasn’t explored further after the early 1990-91 attempts, most notably with the Nidoran family.
This was changed completely in Period 3, characterized by its exploration of the concept of evolution in its many variations. 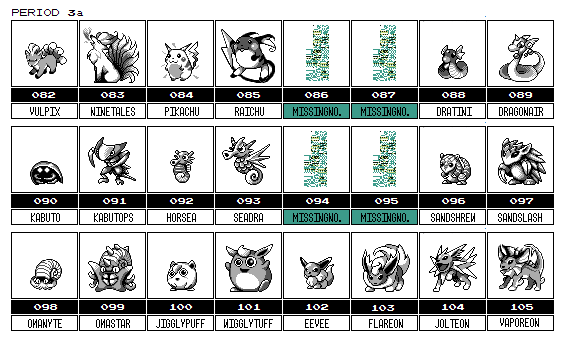 The first direction for ID 082-105 (Vulpix – Vaporeon) seems to be adding evolutionary lines, based partially on common fauna and partially on folklore (Vulpix, Dratini lines), many of them having cute features and being clearly designed with a particular element in mind:

Nishida: There were no specifications other than gameplay ones, I was only requested to make “an electric-type” and “a monster with two evolutions.”

Notably, the Pokémon list begins to align somewhat with the item list, as the evolutionary stones and the fossils seem to be coded simultaneously with the Pokémon of this period (with the exception of the Leaf Stone) and many of the stone evolutions are found right here.

The Dratini line is notable for being a three-stage line, and in fact it is the only P3a line that extends beyond that period. Dragonite is a Period 2b Pokémon, but it’s unknown whether its two pre-evolutions were designed with that Pokémon in mind, or they were connected with the evolutionary bond at a later stage of the development. According to the recent interviews, and some similarities between Dragonair’s proto-sprite (below) and Dragonite’s, however, the first possibility seems to be more likely (as Nishida stated she liked to make previous stages surprisingly different).

Now it’s time to reiterate the difference between a MissingNo. and one of the roughly 110 lost Pokémon. Nishino’s 2018 interview lets us apprehend that many P3 Pokémon were originally intended to have three stages, but one stage was eventually scrapped from most of the lines, just like poor Gorochu.

Nishino: There was also a problem in terms of the size of the game data. We had to save space by taking Pokémon originally designed to evolve twice and making them evolve only once.

This statement is, however, a bit vague and doesn’t imply that these scrapped Pokémon are all MissingNo. because, unfortunately, there’s apparently no room for them in the P3 range – the final Pokémon seem to be pretty tightly coupled in two-stage evolution lines. Most of these lost Pokémon might fall in the total count of 250-300 designs mentioned multiple times by Tajiri and Sugimori (see the introductory article) and might’ve been scrapped mid-development, or coded but deleted shortly after, according to the results of the popularity polls held in that time, without leaving any tangible trace… almost.

Further proof that the four MissingNo. are in fact two 2-stage evolution lines is that MissingNo. 094 has a base cry that is also used for MissingNo. 095 with a lower pitch, which strongly suggests an evolutionary relationship. This means it’s likely we won’t find them in P3, but there’s a slight chance that some of them were re-coded in P5.

The experimentation with evolution continues as the team creates evolutionary stones, two Pokémon lines that could be revived from fossils, and the sole instance of branched evolution in the entire game: the Eevee line. Grass lines are, as usual, missing, but that might be due to the absence of the Leaf Stone.

This pattern is differentiated and included in Period 3 on the grounds of sources and chronology. Very early sprites for Dragonair, the Poliwag line, and the Weedle line (shown below) were posted on the Game Freak website in December 1997, suggesting that they were taken from a single document. 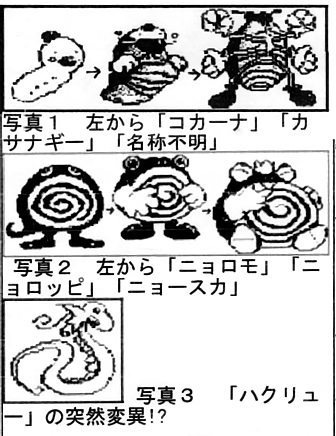 The 106-109 batch is a rare collection of Pokémon that are pre-evolutions of Pokémon designed in previous periods – here, specifically, those of Period 2.  Zubat is the odd one out here, which may hint at a potential Zubat relative in Period 2. Of note is the fact that Ekans and Paras are listed by each other, just like Arbok and Parasect in P2a – could they have been intended as counterparts?

We close Period 3 with the inclusion of the first two three-stage lines into the game: the final two members of the Poliwag line, and the Weedle line in its entirety.

Period 3 Pokémon follow one clear general direction, which is adding evolving elemental fauna to the games.

We can briefly speculate about who went missing before the 190 cut thanks to the lost Pokémon in the 1997 Gold Demo. Apart from Gorochu, Mikon (Vulpix’ unused pre-evo) was most likely a candidate, as Vulpix’ Blue Pokédex entry even hints at its lost pre-evolution. Kingdra might have also been considered during this period, as it would complete a three-stage evolution. There’s a slight chance (but sadly no definitive proof) that some of these scrapped evolutions were re-coded elsewhere in the ID list. More information on that and other P3 lost monsters like Papyoo and Kokana can be found in our “Lost Pokémon Overview” article.