Check out Glitterberri’s site for more comments and translations. Image enhanced from this one. 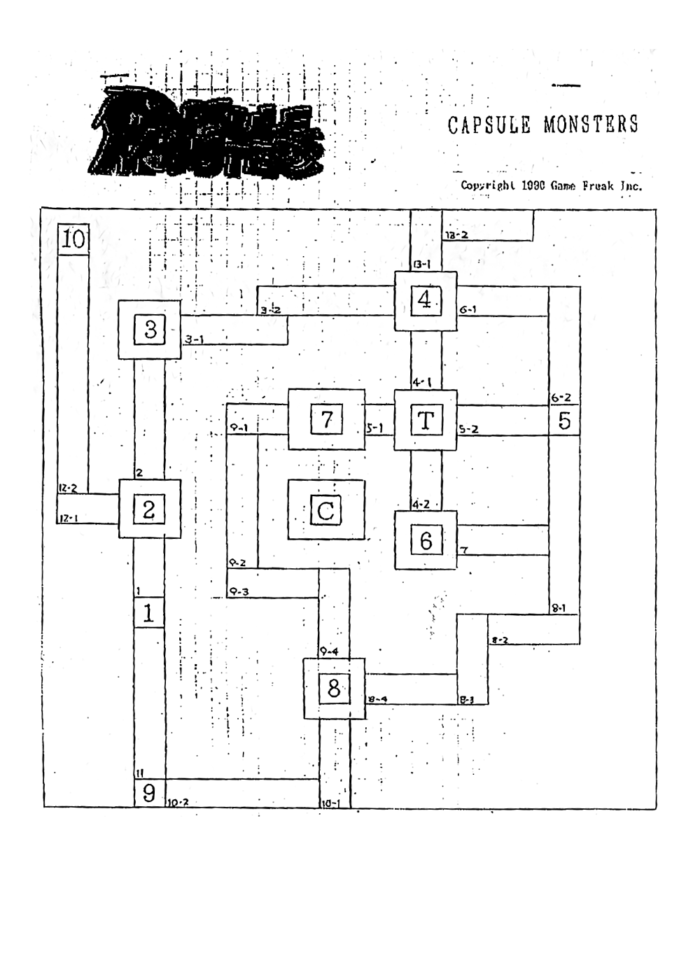 The 1990 Capsule Monsters layout map of Kanto shows 12 key locations instead of the final 11. Specific town names are not written; instead, each “key area” is identified by a number from 1 to 10, plus two locations marked “T” and “C”. Each route and sea route is labelled using two numbers such as “3-1” and “8-4” The first digit is the route number, and the second digit is an individual section of the route (one for each horizontal and vertical section.) This differs from the final version’s naming pattern, where most routes only have one number.
Other differences from the final map: Route 17, a.k.a. Cycling Road (9-2, 9-3, 9-4) turns and enters Fuchsia City from the north rather than from the west. Road 9-4 does not exist in the final version, where the Safari Zone is explicitly north of Fuchsia, as it would overlap with the Safari Zone (maybe it was changed for this reason). When 9-2 and 9-3 became Route 17, the developers decided that it would instead end on Route 18, which connects to Fuchsia City from the west.
The unreleased 12th location is found below ‘7’ (what is now Celadon City) and is labelled ‘C’. Judging by the geography of both the real and the fictional Kanto region, it could have been a seaside location.

You may notice that Pallet Town, Lavender Town, Cinnabar Island and Indigo Plateau don’t use the concentric squares symbol (the “square-within-a-square”) that can be seen on most key areas (including C and T). Contrary to how it may seem at first glance, there’s no proof that the presence of a double square hints at a gym or at a more notable location in general. In actuality, the concentric squares are used to define the exact block size of each map.

If you take a look at the final Kanto map, those concentric squares perfectly reproduce the size and shape of the corresponding final cities. The map is drawn on a squared paper sheet on a scale of about 1:5, where 1 square equates to 5 blocks. The proportion is not exac,t as the GameBoy screen can only show 20×18 tiles (160×144 pixels). 4×4 squares  equate to 20×18 blocks (maps are made up of 4×4 tile blocks, and one tile is 8×8 pixels, so a block is a total of 32×32 pixels).

We only have 3 different city sizes both in the prototype Kanto and the final Kanto.

Due to the approximate precision of the Capsule Monsters map’s proportions, we believe that the squares representing block size is the most plausible hypothesis. Following this line of reasoning, the “C” area measured x25 x y18 blocks, just like Celadon City in the final game, and was probably located 9y blocks away from area 7 (Celadon City). It is unknown how C was supposed to be reached.

The 1990 map then served as the actual blueprint to code the overworld map in the game. It would remain largely unchanged during the 6 years of development –  programmed in from the beginning and set in stone.

The map was reprinted in Tomisawa’s book, accompanied by this caption:

It’s also interesting to note how this sheet features a different, more polished logo in comparison to the one depicted on the cover (which is unfortunately way too darkened to be able to restore.)