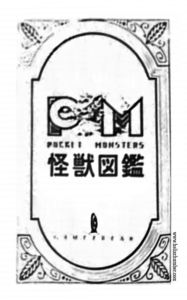 The PM Kaiju Zukan (we will refer to it as “Kaiju Index” for short) is a black and white booklet printed in a longer format than our standard A4, possibly a legal 216 x 340 mm format (this could help us date it, so if you have any idea about this kind of stuff, please let us know), allegedly composed of about 25 pages.
It sports a fairly fancy cover with a working Pokémon Logo that reads “PM” with a Pokémon standing between the two letters, and a Pokéball acting as the hole in the “P”.

The monster on the cover is a riddle in itself. It’s clear that it is one of the Kaiju-inspired Pokémon, possibly Nidoking, Rhydon, Gyaoon, or Blastoise. Unfortunately, again, the resolution is too low to make out its distinct features.

The cover also features one of the first instances ever of the Game Freak logo, the first dated one being the unused logo in Pulseman. Its fancy presentation may imply that it was supposed to be a document not just intended for the GF crew, but perhaps as a compendium for Nintendo, APE/Creatures Inc., or other companies involved in the project at large.

As its name suggests (“Zukan” is in fact the same word used for the Pokédex in Japanese), the Kaiju Index might be a sort of printed proto-Pokédex for the original roster of 190 Pokémon, and may have been the last official document featuring complete names and sprites of every Pokémon that occupied a slot now held by Missingno.
These lost monsters may have been shown exactly as they were intended to appear in the games, just months before disappearing forever. Additionally, if Morimoto’s account about Mew’s creation is accurate, then Mew was not featured at all in this list, and something else occupied its slot. Needless to say, finding the full Kaiju Index would be the next Holy Grail of Pokémon history.

The catalogue lists 8 monsters per page, in groups of 4. The monsters are listed following the Internal ID order. Each monster has its own slot, featuring its 2 sprites (front and back, both facing right; the back sprite size is doubled), its name, and its internal ID number, while each picture is a printed screenshot taken from a Super Game Boy, possibly from an in-development build of the game. The Super Game Boy’s existence can help us narrow down the date to an early/mid 1994 – early 1995 timeframe (from the Super Game Boy’s release to some time before the debug).

The layout of each screenshot is made very clear from the closeups of Nidoking (still called Maikō ♂  at the time), Slowbro, and Kadabra. It appears to be similar to the “Monster” debug menu seen in the Spaceworld 1997 prototypes of Gold and Silver, which were built off of Red and Green’s engine and probably shared several rudimentary debugging features.

Did it really feature 190 monsters?

We’ll briefly analyze the page progression and highlight some discrepancies.
In one of his thorough Pokémon analysis, Crystal_ interestingly pointed out that not all the MissingNo. could, in fact, have been completely coded monsters. You can read their insightful post here and here.

Had we not seen Kadabra’s placement on the page, we would’ve gotten the illusion the Kaiju Index seamlessly listed the Pokémon progression from 001 to 190.
The problem is that the placement of 038 Kadabra in an uneven slot possibly the first slot of the page) doesn’t make much sense and raises some questions. For Kadabra to be the first uneven slot, we must theorize 3 pokémon are missing before it, and 5 between Kadabra and Magikarp. Kadabra could also be the fifth slot and not the first as speculated, leaving us with 7 slots missing before Kadabra and just one after it. 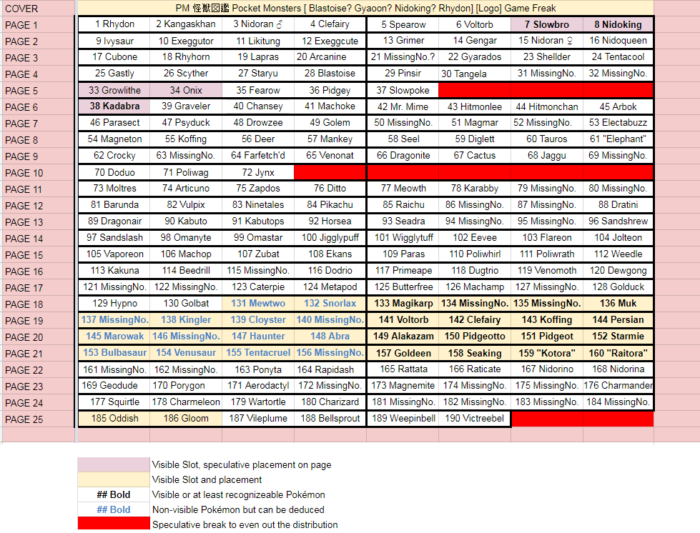 For all the 190 pokémon to be there, There might’ve been a reprint of some pages between 38 and 133 as a kind of last-minute amendment, or some other kind of interruption, like a logo or some captions.

There’s a slight chance of duplicate designs for some Pokémon, like Barunda (A) and possibly (B), but that wouldn’t really make sense on a seemingly ultimate list.
Anyway, as we previously said, the pages shown confirm the existence of 8 Missingno. In total, there’s also at least another page after 160 that could range from 161 to 168 including even Missingno. 161 and 162. We have of course no further proof but common sense for that.
At any rate, a glaring question remains, Why print a numbered list with missing numbers?